A Lifetime of Devotion to Karate 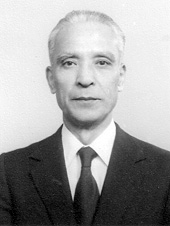 Master Sugiura Motokuni was born on Oct 4, 1924 in Aichi Prefecture. His karate career began in his youth, when he became a student of Shotokan karate. At university he studied under Supreme Master Funakoshi Gichin, and especially with Funakoshi’s second son Yoshitaka. He attained his 1st Dan at age 20.

After graduation in 1944, Master Sugiura spent a year in the Tsuchiura Navy Flying Corps, but he soon returned to the martial art he loved, resuming his karate training under Master Nakayama Masatoshi while holding a job at a junior college in Tokyo. During these years, he attained the rank of 3rd Dan.

In 1955, Master Sugiura gave up his job at the junior college and began working full-time in the JKA’s Guidance Division. He was also appointed director of the JKA, and assigned to managing the instructors at the headquarters dojo. It was the start of a lifetime of contribution to the art of karate. Not only did he teach at the JKA headquarters dojo, but he also helped establish the rules for tournaments, refereed at matches, and coached at as many as five universities around Tokyo.

In 1958, a year after the Japanese government granted the JKA official recognition, Master Sugiura received his university license as a Physical Education instructor. Over the next five years, he was a part-time Physical Education teacher and lecturer at Asia University, while also attaining his 6th Dan.

In the next decade he began producing materials to help promote the way of karate around the world. In 1961, he helped to edit the textbook “Basics of Karate-do,” which identified some common basic errors in karate techniques. In 1963, he created a six-volume, English-language 8mm film entitled “Karate Seminar.” In the summer of the same year, he resigned as Director of the JKA, and became a full-time Physical Education teacher.

Master Sugiura’s circle of activities kept on expanding. He served as president of the Koganei City Karatedo Federation and Physical Education Association. He joined the Japan Martial Arts Society. And he began creating, in partnership with Kodansha International Ltd., a five-volume video series in Japanese and English on the kata.

Soon Master Sugiura’s efforts were attracting attention outside Japan. He was invited to China and Taiwan for the Japan Friendship Karatedo Cup. Then, in August 1975, he went to Los Angeles and Hawaii to attend the International Amateur Karate Federation general meeting and see the JKA-sponsored 7th IAKF Championship. Shortly thereafter, “MonthlyKarate-do” magazine began publishing his column.

1976 was another big year for international karate. In August 1976, Master Sugiura—now an 8th Dan, a Karate Technical Committee member, and a full-time professor at Asia University—accompanied the university Alumni Association on an historic visit to Indonesia. Then he was sent to the U.S. to observe how karate was being taught at several American universities.

The next year, Master Sugiura completed his thesis “A System of Karate-do,” which discussed the true essence of karate. He spent the next few years creating “Teaching Materials for Karate-do as Physical Education.” And in 1989, he drafted the supplementary karate guidelines for these materials.

In March 1990, Master Sugiura retired from his post at Asia University, and the next year was appointed as Chief Instructor of the JKA. In 1992, he received his 9th Dan.

One of Master Sugiura’s greatest gifts to the JKA has been his consistent focus on the basics: kihon, kumite and kata. As he emphasizes, kihon teaches us how to move, ensuring our technique is flawless; kumite teaches us how to concentrate, and how to best apply our technique for maximum power; kata teaches us both at once—and opens the way to the body-mind unity that is the soul of karate.